Richard Mullin’s passion for automobiles began at an early age working alongside his father, a mechanical engineer, in the family garage restoring antique cars and trucks.

After graduating from high school he attended Michigan Technological University for Automotive Engineering and received his degree from State University of New York in 1975 in Automotive Technology.

Currently, he sits on the advisory board for Automotive Training Center. After 35 years as a working manager in the exotic car industry, Richard had the opportunity to begin his own business. Today he applies his 40 years of expertise to a variety of vintage automobiles  including:

Over the years he has produced show car winners at Pebble Beach, AACA Junior, Senior, Preservation, Governor’s Cup, Amelia Island, Cavallino Classics, RROC Nationals, New Hope and Radnor Hunt Concourse. It has been his attention to detail, authenticity, and commitment to restoring vehicles in a traditional manner which has brought him much recognition and appreciation from customers and personal satisfaction from his work.

Under the tutelage of Richard Mullin, employees of Richard Mullin Coachbuilding are very talented apprentices learning the unique methods of fabrication and perfecting skills with equipment rarely found in other body shops. Richard remains fully committed to education and the continuation of traditional skills, which are quickly receding in the automotive repair and fabrication industry.

Recently, Richard Mullin Coachbuilding has moved to a brand new facility in Downingtown PA which overs the same great service and attention to detail but in a larger and more convenient space. 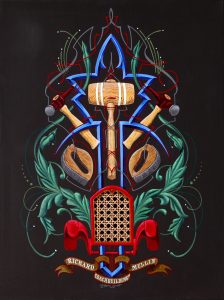 A life long passion...
Richard Mullin’s passion for automobiles began at an early age working alongside his father, a mechanical engineer, in the family garage restoring antique cars and trucks. Read More

We have moved from our previous location on 2485 Yellow Springs Road to 1003 Chestnut Road, Downingtown, PA 19355-3434 Thanks for joining us in our new adventure and hope to see you soon.